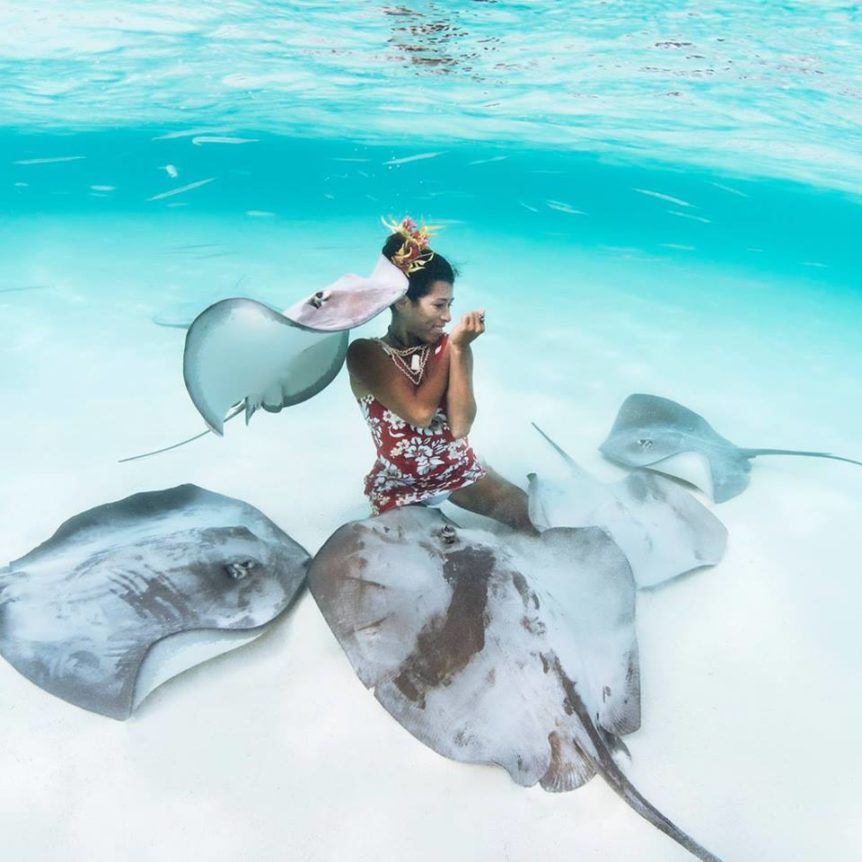 The mere thought of swimming with these majestic creatures is rejected by many people due to the unfortunate incident that happened years ago with Steve Erwin.

Immediately following the accident, the sting ray gained a bad reputation or stigma and became labeled “dangerous” and a “killer”

Today I want to share my personal experience with the sting rays.  On my recent visit to Mo’orea I shared space with these soft and gentle creatures during a photo shoot with Christian Coulombe.

These beautiful creatures frequent shallow lagoons all over French Polynesia. Each lagoon has their own resident sting rays. The ones I met live near by a spot frequented by many boat operators in Haapiti.

They are very accustomed to humans and they get daily treats from tour boat operators who have a symbiotic relationship with them.

Believe it or not, this custom or tradition of feeding your lagoon residents or the creatures living in your place of daily departure to the sea, has ancient roots in the Polynesian culture.  Stories are told in Hawaii, Fiji, Tonga, Samoa, Aotearoa all the way to Rapa Nui ( Easter Island ) 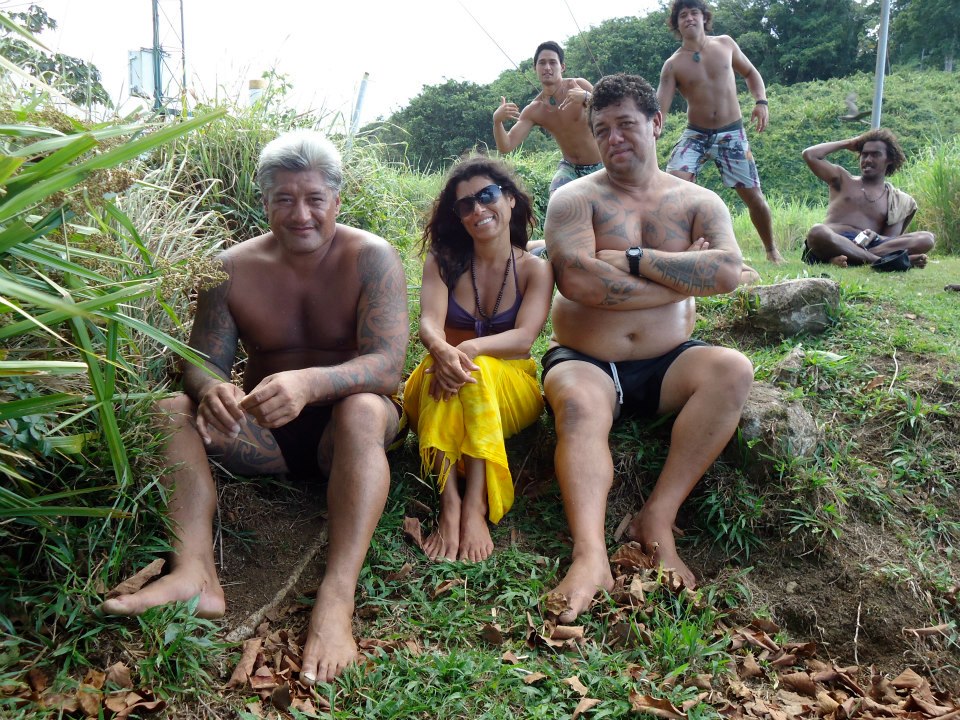 The people of Tonga.

It is known that fisherman would feed their resident sharks before and after going fishing. This was also a way of paying respect and giving an offering for protection from their Aumakua ( animal spirit guardian ).  It created a bond between them.

Connecting or having a symbiotic relationship with marine creatures is traditional of many ancient cultures around our globe. This great similarity is just one of many ways to connect with each other as humans living in the same planet.

Having interactions or connecting with marine creatures is beautiful and yes it could be dangerous some times. I personally like to observe, learn and understand each creature’s behavior before I have any physical interaction with them. I like to observe them first, learn about them. Only then I can feel confident about proper behavior while enjoying their company.

To me, each animal has a different medicine to offer, a different “vibe” as we may call it. When I’m in the ocean with any of them I try to immerse myself in to each animal’s vibration so that I can interact with them in a way that they can accept me and understand/feel my intentions.

Swimming with a whale is much different than swimming with sting rays. With sharks a total different story… and so on.  Once we can understand the creature and its behavior, we can connect with them, naturally and spontaneously.

The barbed stinger is only used for self defense so if you don’t act like a threat to them they will not use it against you.

It’s important to act calm in the presence of all marine creatures. It doesn’t matter if its a reef fish or a whale.  You have to give them time to adjust to your presence. You are in their home.  Being respectful and gentle is necessary for a positive and good interaction with any marine creature

Sting rays are peaceful by nature, specially these guys at the lagoon. They have been visited by thousands of lucky visitors thoughout the years. Most likely gathered there in the past by treats offered by the local villagers and fisherman who used the pass to go out to sea every morning.

The movement of the sting ray is usually slow and quite graceful to watch underwater. Their diamond shaped bodies and undulating wing movements are hypnotizing to me.  They transmit a certain peaceful feeling when I watch them glide through the lagoon as I snorkel, or even from above on a boat.

They look like little ghosts flying under the sea if you lay down on the sandy bottom and look at them from underneath. The eyes of the sting ray are on the top of their bodies but the nostrils are right above the mouth which makes most people think that the nostrils are their eyes when photographed or seen from below.

They feed on fish and small crustaceans, thats why their noses are in the bottom.  When we did our photo shoot I had tiny pieces of fish inside my hand. After I feed them a few times I don’t have to do much to have them gather near me.

After hanging out for a while I got to get to know them a little better.  It was a magical experience.

Sharks and rays have been on the planet for millions of years.

They are resilient, constantly adapting and surviving the earth’s  natural changes.  It was such a treat to swim with them.

Sadly, many species or rays including the sting ray are currently threatened world wide.  Humans and the commercial fishing industry are the main cause of this decline.

To help the sting rays, sharks and many other marine creatures is very important to know where exactly our seafood comes from.

Did it come from your local fisher man?

Did it fly in from another country thousands of miles away from you? How was it caught? These simple questions are key for conservation of the rays and many marine creatures.

We can protect them with simple daily actions as consumers and citizens of the world. After all, protecting them is protecting us and our survival on the planet.